The Verdi Club’s history is intertwined with the history of San Francisco. In 1916, a group of Italian-American men, led by George Gaggetti, met in the back of a barbershop at 24th and Vermont Streets and founded the Verdi Club. They named it after Giuseppe Verdi, Italy’s most-famous opera composer. The Verdi Club has operated continuously in San Francisco since its opening, celebrating fellowship and sponsoring civic and social activities.

Today, it is known in the city for hosting generational celebrations, emerging bands, weddings, spoken word, ballroom dancing revival events and so much more.

It was during the early part of this year that a group of Italian – American men, led by George Gaggetti, met in the back of a barber shop at 24th and Vermont Street, to lay out plans for the founding of the club. Mr. Gaggetti presided at the meeting and was elected president. The first initiation was held a few days later, over 50 members were accepted. With increasing membership, the Verdi Club moved from the back room of the barber shop, to a small hall on 24th and Folsom Street.

The club once again outgrew its space and moved to their own building on 26th Street near Alabama.

Successful in social events, the club’s members decided to invade the sport’s field and a baseball team was formed in the late twenties. This first venture in the athletic world was met favorably and a few years later soccer and baseball teams were formed. Both baseball and soccer teams became widely known up and down the coast.
^

The Verdi soccer team after one session in the second division, entered the San Francisco Football League first division and became one of the most publicized teams.

The publicity received in newspapers made the club ever more popular, and by this time over 400 had joined. This created a problem. The building was too small. Plans were made to build a suitable club.

In May, the Verdi Club’s dream of a large and modern building became a reality with the opening of the Club at 2424 Mariposa Street.

In the next few months, after the opening of the new building, over 500 members joined. The soccer team became known as one of the best in California, winning many titles, as did the baseball team. Many of the famous baseball stars got their start in the club, in the Funston League, including Joe DiMaggio. When Joe graduated to the majors, it was the Verdi Club that sponsored the DiMaggio Day at Seals Stadium.

A women’s rooting section for sporting events, known as the Verdiettes, was also organized. The local dailies ran stories about the activities of this active group, which was one of the most colorful in local sports.

Bowling teams for both sexes were added to the athletic section.

Membership to the club was reopened in order to fill the vacancies created by the war years.

Dinner dances, barn dances, picnics and barbecues were some of the many activities of the club. Meetings were held every Monday evening.

The war years found the club struggling to stay in sports and continue its social activities. It was then that 30 members took over the club and financed it, so that the building would remain in the possession of the club. Offices were built on the mezzanine floors and rented out to various unions and associations.

During the war and up to 1952, the club was under management of the stockholders. In 1954, club members could buy into the building. They numbered 22 stockholders and 40 associate members. After 1954, most stockholders joined the regular club, and from then on the club prospered.

Member dues were $12 a year until the 1980s. The club expanded to 120 members and all were vested. Membership was closed unless someone passed away.

There was no liquor license and all drinks were included.

The club formed a bowling league for its members. The teams had both men and women.

The club purchased a liquor license that cost $12,000.

The club was opened to associate members. At this time, 80% of the club’s members were Italian and worked for Scavenger.

One of the more memorable themed dances was a western dance where club raffled off a goat and a duck.

Until the late eighties, you could join the Verdiettes if you were a wife of a member or a girlfriend. After that, a non-member could become a Verdiette.

Line dancing to the song “Elvira” by the Oak Ridge Boys becomes a part of every Verdi Club dinner dance.

The popular South American dance style of Milonga is featured prominently at the club. Dance lessons ensue along with dancing on Thursday nights.
^

Award winning Chef Sean Gawel signs on as the official chef at The Verdi Club.

Bill Magidson becomes the most senior member to become president.

Rock Band Land’s beginnings are at the Verdi Club.

Current club General Manager, Jason Mulvaney, signs on as the manager of the Verdi Club.
^

The club opens membership to women for the first time..

May 14 is the 100th Anniversary celebration of the Verdi Club.

Vintage Class with a Side of Multigenerational Party” – San Francisco Chronicle

Verdi Club member and volunteer, Bonnie McGregor, designs and oversees renovations of the building including the entryway, lounge and ballroom.
^

Verdi Club gives back to the community through food and toy drives for local families.

In March, The Verdi Club is closed due to the global COVID-19 pandemic.

In May, “Verdi To Go” Friday Night Family Dinners are launched. The weekly take-out program, orchestrated by long-standing Chef Sean Gawel and Club Manager Jason Mulvaney, supports members by providing handcrafted meals that can be ordered then picked up at the club. It is open to the public and becomes very popular! 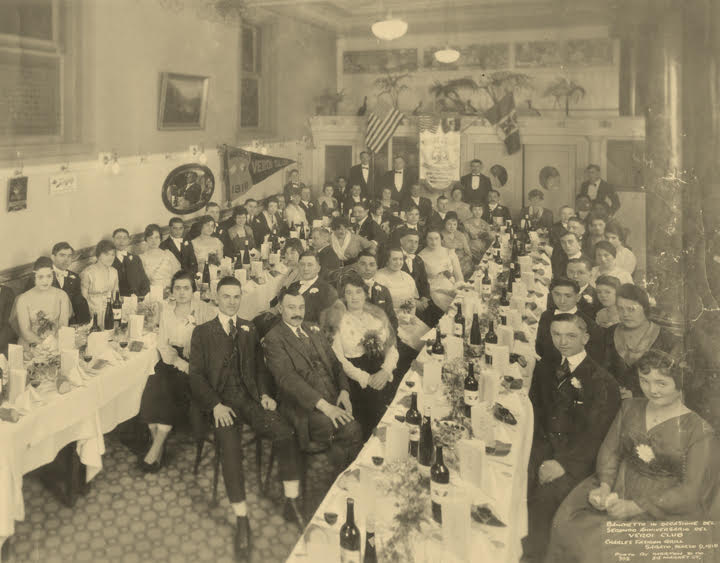 1918 ~ March 9th was the 2nd Verdi Club Anniversary Dinner held at Charles Fashion Grill, 8 months prior to the end of World War I. This was the tail end of the Rag Time music and dance era. 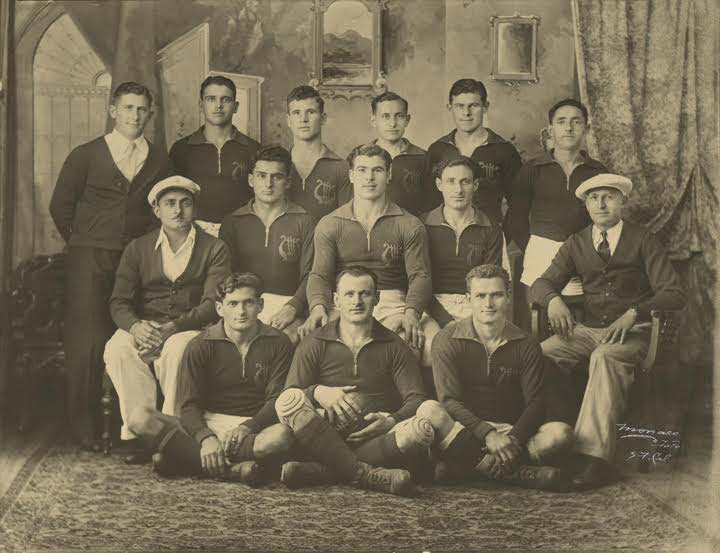 1933-1934 ~ The Verdi soccer team following one season in the second division, entered the San Francisco Football League first division, and became one of the most publicized teams. Winning many titles, the soccer team was one of the best in California. 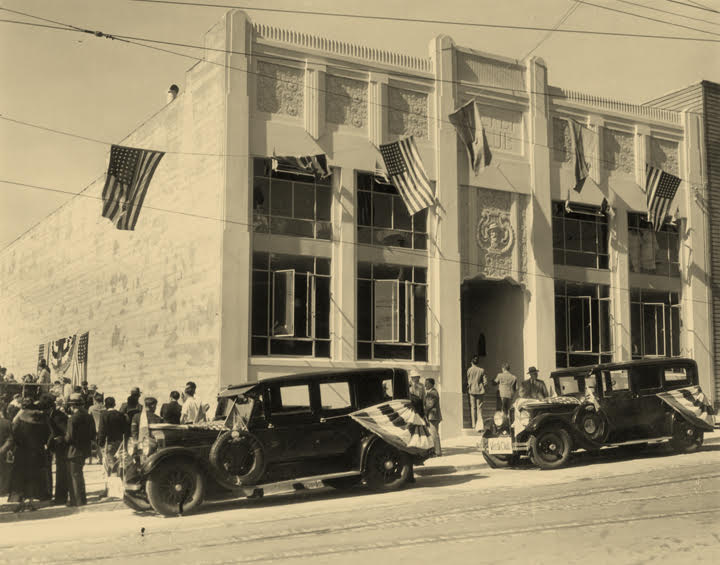 1935 ~ It was May of this year that the Verdi Club’s dream of a large and modern building became a reality with the opening of the Club at 2424 Mariposa Street. In the following months over 500 new members joined. 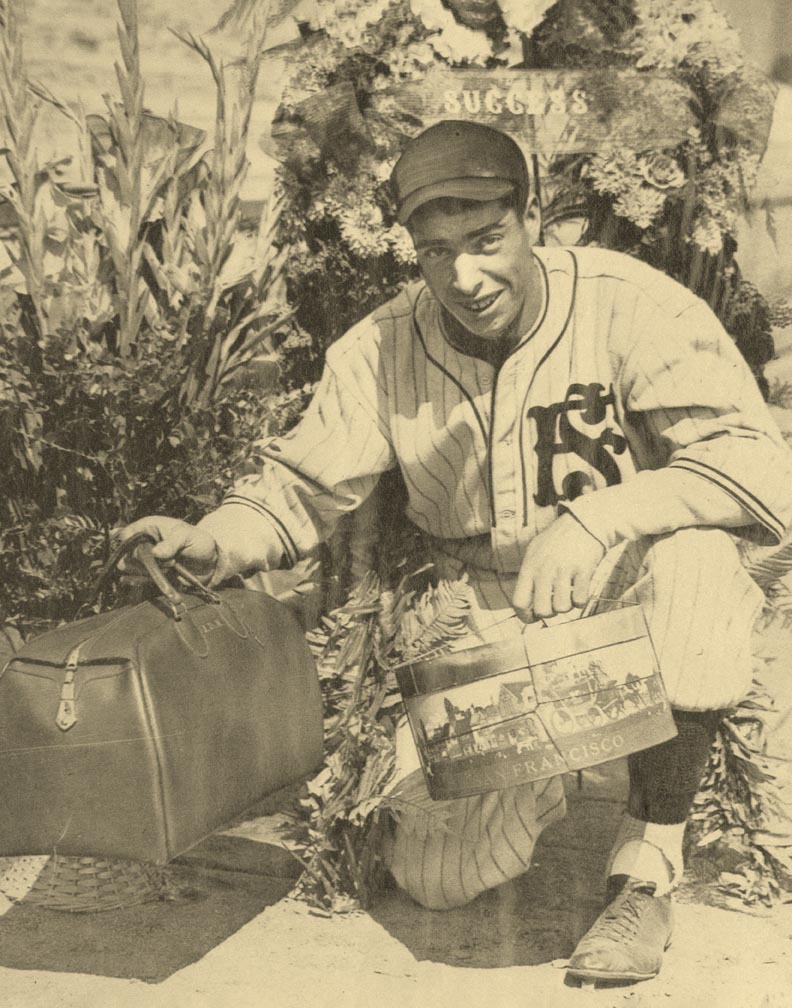 After his stint with the San Francisco Seals, it was time for Joe Dimaggio to pack up and head for the East Coast to begin his career with the New York Yankees. As a gesture for his service and showcasing his talent to fans, the Verdi Club of San Francisco presented Joe with a travelling bag, a hat and other gifts. The picture was taken on July 21, 1935, when Joe was 20 years old 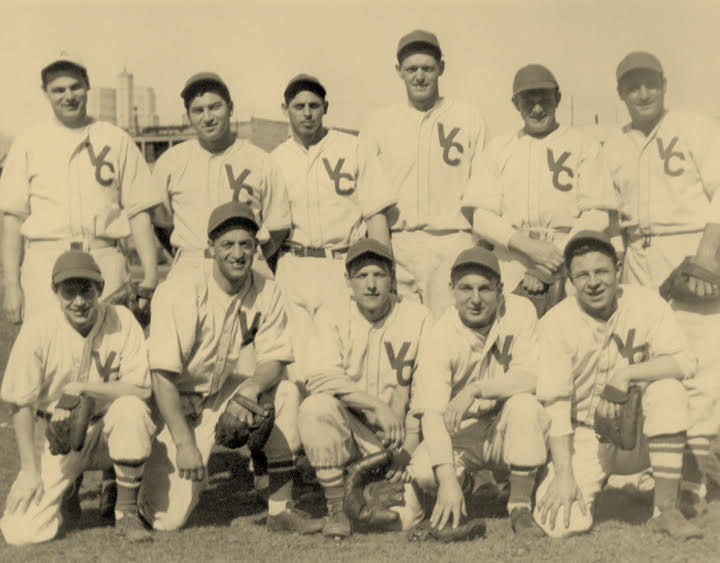 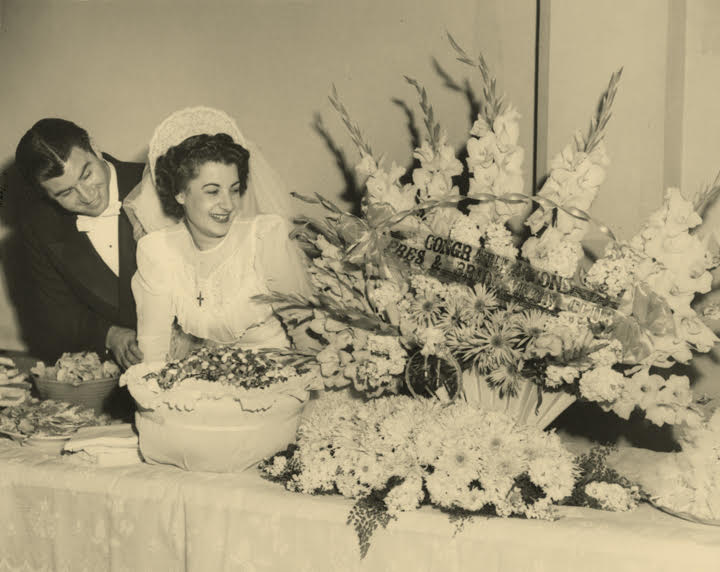 1949 ~ July 31st Verdi Club President Marty and his new wife Betty Stimmel enjoying their wedding reception at the Verdi Club with a special flower arrangement from the Club. 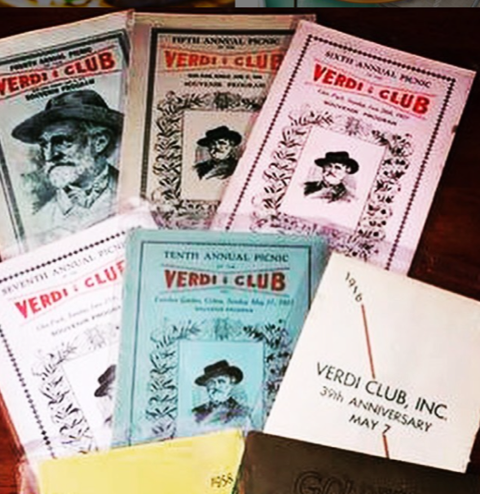 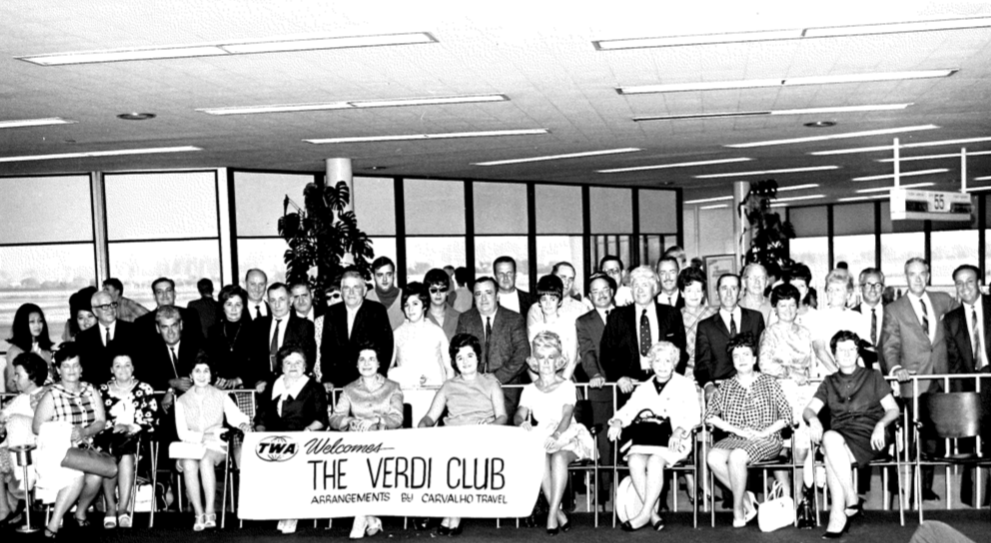 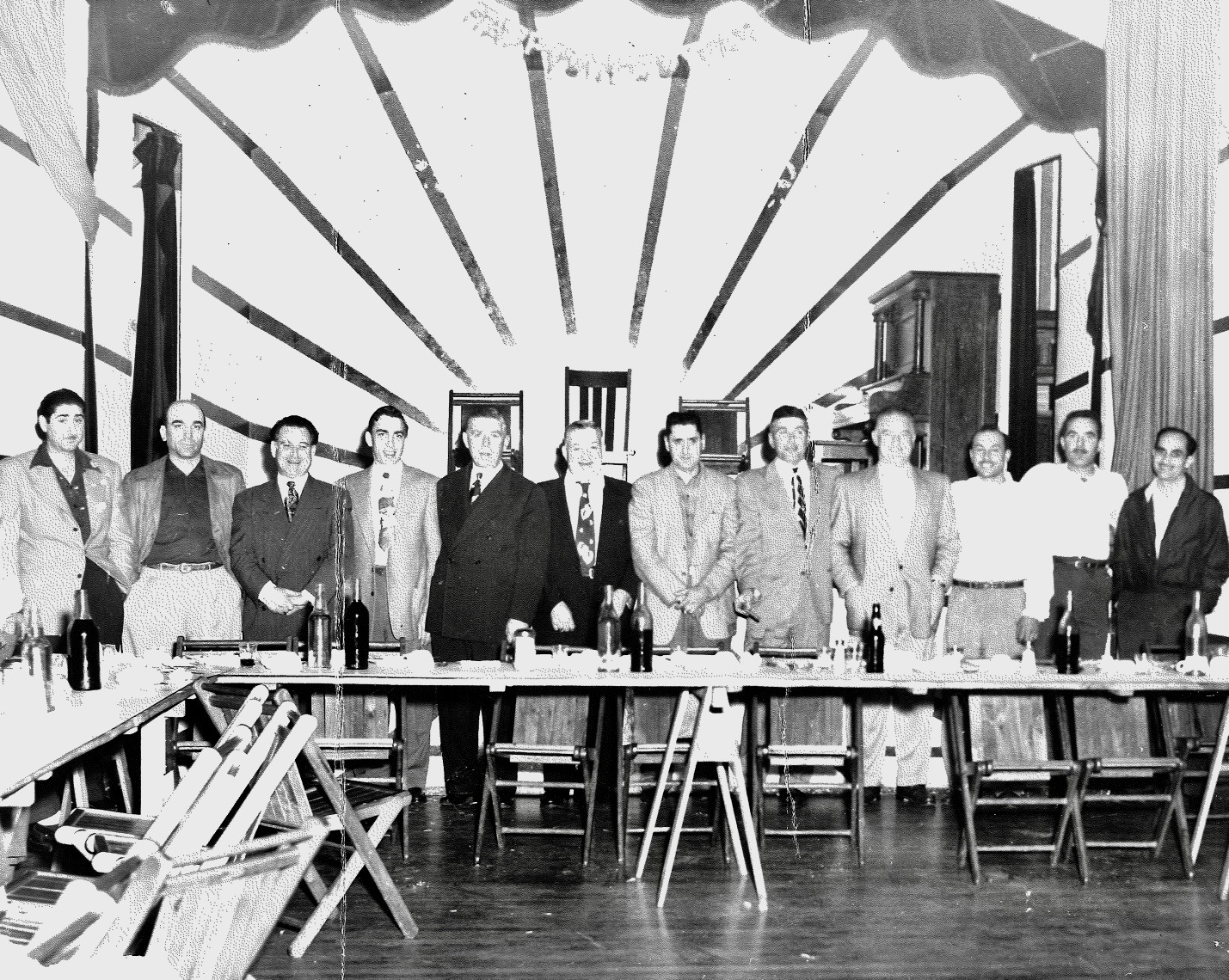 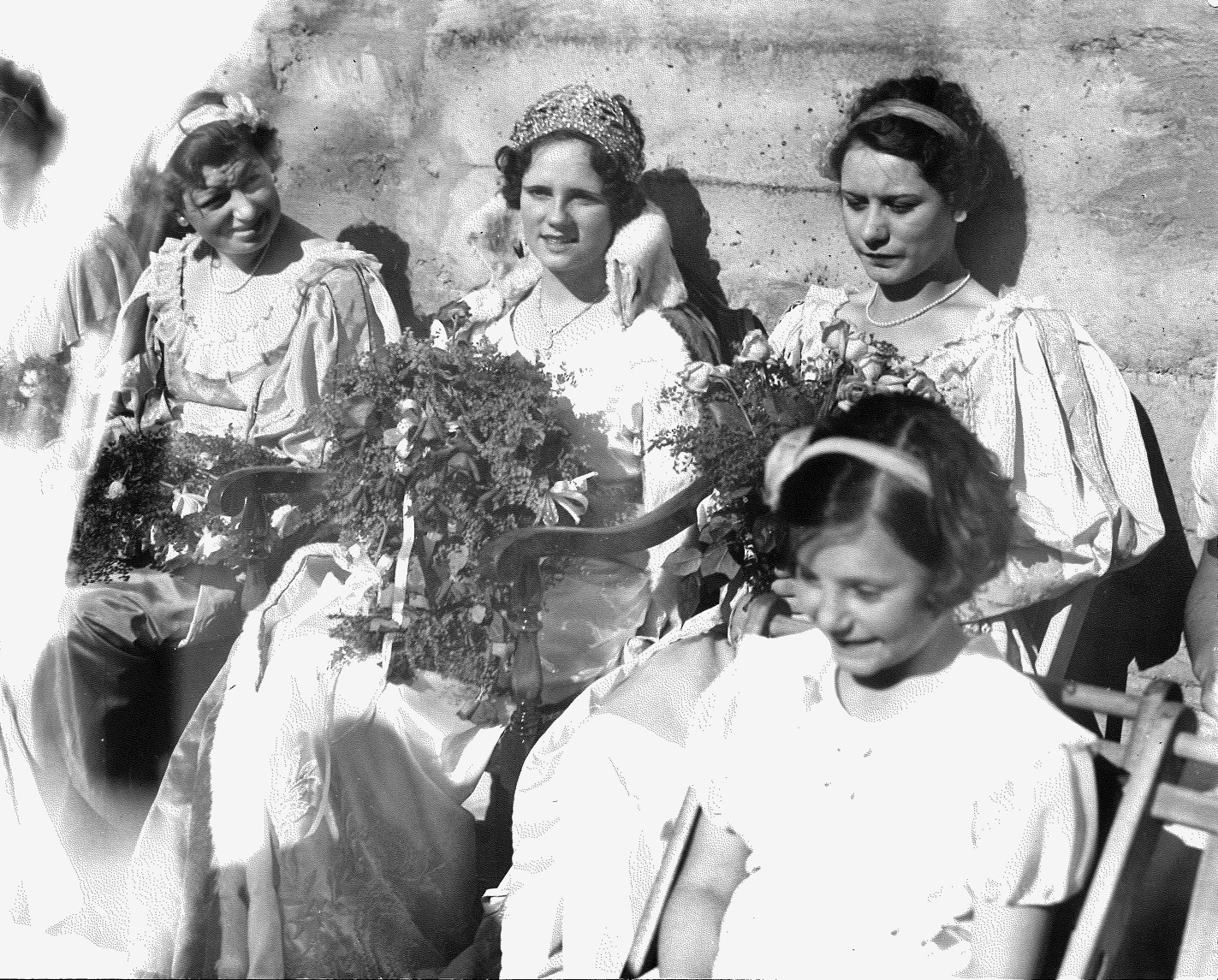